Greta was traveling on a three-week trip around Europe. I was able to catch a moment with her while she was staying in Fuengirola before heading off to her next destination. 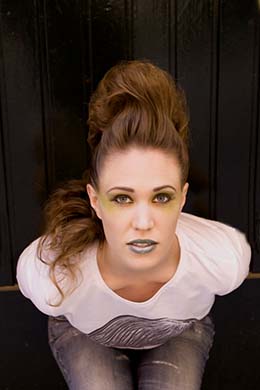 Are you traveling or do you live here in Spain?
I work as a Language Assistant in Santiago teaching students English. This past year, several of Shimada's Models have been participants from the same program.

How did you meet Shimada?
I read a post about “La modelo del mes” on one of our Facebook forums. When I was headed back home for Christmas, I needed a haircut. Since I had a layover in Madrid, I decided to contact him.

Why did you come to Spain?
I actually applied to the program as a backup. I was headed off to Panama in February 2013 to work with an NGO called Floating Doctors. The week before my departure, I had a traumatic accident involving a pellet gun. While I was loading the chamber, the mechanism malfunctioned and the gun fired. It shot off part of my index finger and thumb. This prevented me from going to Panama. After my recovery, I decided to take advantage of the position in Spain.

What was your recovery process like?
Initially, I was in an incredible amount of pain, physically and emotionally. No one could tell me what I would wake up with after surgery. The first time we took of my cast, I fainted from the pain. It was frustrating as my surgeon and I were not on the same page about treatment.

What do you mean your surgeon wasn't on the same page?
I did some research and I found a treatment to regrow my fingers. It was hard to find medical professional who would support me. I was told, “There was such a high risk of infection to your bone that we can't support you in this endeavor.” I was recovering while also having to advocate for myself. This is what I wanted to do. There were also concerns of cost, how to pay for this as it was not covered by insurance. I ended up fundraising the money.

How do you regrow fingers?
I contacted a company which has treatment used usually for burn victims. I used an extracellular matrix which acts like an infrastructure to regrow muscle and tissue. Everyday, for two months, I put on this powder followed by a saline solution. I was literally putting salt in a wound. I also went to pain management therapy which I had my doubts about. 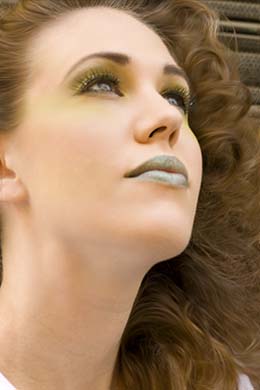 Did you find the therapy helped?
I think it was one of the best decisions I made. I always try to be positive, It was nice to admit that I felt horrible some days. I learned to cope with my emotional and physical feelings. I didn’t want to take pain medications on a daily basis as some are heavily addictive. By the fall , I was ready to move abroad. It was an amazing turnaround

How did you fundraise this procedure?
I did it through Kickstarter. It felt weird asking people for money, It was difficult for me to feel I deserved something like this, but this is something I really wanted. I ended up raising over $5000.

So was the procedure successful?
Yes, I think my fingers look fantastic and my nails even grew back. It was incredible seeing my body do this, even working through the pain. I was very determined, and I had positive energy and support. My thumb looks like a normal thumb with just a bit of the tip is missing. My index is a little shorter than the other fingers, but I’m stoked with the results.

Do you still run into any difficulties?
I am very fortunate this did not happen to my dominate hand. I’m still in chronic pain. Small things you don't think about such as pushing an elevator button, tying your shoelaces, are a little difficult. I try not to let it get to me. Now, I see it as more of an inconvenience and let my frustration pass.

Was there anything that surprised you about this journey?
I was surprised about how supportive people were. People were willing to help me fundraise. I was also surprised at how many people would open up with their own stories of trauma and injury.

Was it easy for you to transition into a new country?
I feel sometimes that this accident was a wake up call. I learned that I can’t control everything, that I need to be collective about life.  Worse things can happen, but I still try to honor myself. Every other challenge I have had so far in Spain has been a piece of cake in comparison. It was refreshing moving to another country with a new job, new language, and new city.

How did you get involved in “La modelo del mes” project?
In December, I told Shimada how I raised funds for my procedure on Kickstarter. He seemed interested in crowdfunding his project. I had a flight to catch and I ended up running out the door without exchanging information to follow-up. About two months later, I finally contacted him with all some possibilities. He responded by asking me to participate in "La modelo del mes." 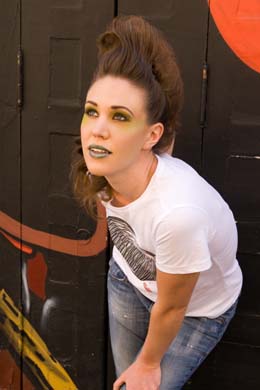 How did you react?
I was floored, I didn’t expect him to ask me. I am not the type of person who likes to be in the spotlight. I’ve been trying to say yes to the Universe during my entire experience in Spain, so I said I would do it.

What was your experience like?
The day before, he had some potential ideas. The next day, he had a new idea, a Mohawk. I didn't know how he was going to do it...turns out hairspray can do anything. The first look was edgy and rebellious. The second was more elegant and feminine. Shimada is just a fountain of energy and creativity,  I loved working with him. We even had some company to chat us up a bit. Another curious stylist came into the salon and ended up tagging along to help out.

How did you feel having your pictures taken?
I am not used to having my picture taken or getting looks from people on the street. It took some time and I tried to leave all of my worries behind. He told me just to be awkward. Since I already felt that way, it was easier to get into it. Of course, he also told me to “be natural.”

Did you tell anyone you were going to be modeling?
I did try to keep it under wraps. I preferred for it to debut and then I could tell people. I felt strange saying, “I'm going to Madrid for the weekend to model.” I get to share my story, that is what I am most excited about.

What do you think of the photos?
I didn't recognize myself. I offered to help Shimada start an Instagram account and he sent me a few pictures. I didn't even catch that he included one of me. I couldn't believe I missed it.

So you're in the middle of your trip, where are you off to next?
Right now I am in Andalusia Spain, as I will be moving to Fuengirola Spain next year. Then I am off to Italy, Turkey, and Greece. I may have bit off more than I can chew, but I am having so much fun! This time last year, I was recovering. I couldn't imagine I would be traveling solo for three weeks or even living in Spain. It’s incredible that something traumatic and unexpected can change your life in such in an incredible way.


The views and opinions expressed are those of the contributing authors and those interviewed. They do not necessarily represent the views of Shimada Kemp: Peluquero y estilista.