Right off of Plaza Jacinto Benavente, I met with Tricia on the balcony of her new language school, Tringlish.

Tricia, how are you today?
Honestly, I’m exhausted. I just opened my new English Language School, Tringlish, but I am still working a job during the day. Right now my schedule is really packed.

What brought you to Spain in the first place?
As part of my last year of my Education Degree, I worked in the Dominican Republic as part of Teachers Across Borders program. After, I wanted to go somewhere else that inspired me. I chose Spain because I had never been to Europe and they spoke Spanish. When I looked into coming here, Canada and Spain just had reached an agreement on a Youth Mobility Visa. After a year of planning, I bought a one way ticket to Barcelona.

So initially you traveled to Barcelona, then you headed to Madrid?
Not exactly. I was only there for two weeks. After checking it out, I decided to head off to Valencia and then, I moved to Sevilla. I got a job at a language school, but it was an awful experience. I eventually harassed the Education Department enough that they offered me a job working as a Language Assistant in a public school. I was then offered a more expanded position as a Visiting Teacher, but the position was in Madrid. After some thought, I decided to take it.

So how did Tringlish, your language school, begin?
Well, I worked as a Visiting Teacher in Madrid for a year. Six weeks before my second year, they cancelled the program and offered me a Language Assistant position, a sixty-percent pay cut. At that point, I had to take matters into my own hands and looked into starting my own business.

Did you find it difficult to start Tringlish?

Every situation is different. Because I was essentially demoted, it also came with a change in visa status. I couldn’t legally work autonomously, so I had to get residency. It required a bit...well a lot of patience. I had to sometimes speak with multiple people to get correct information and I was given difficult deadlines to submit paperwork. This led to a lot of scrambling around and a few flights to Canada. In retrospect, I should have hired a lawyer to help with all of this.

Do you think their expectations were reasonable?
It’s hard to say. I was told many times that it was impossible to change my visa status and now I have my residency card. Working the whole time, I had to go to these offices during their limited business hours. It can take a couple of weeks to just get started. I was surprised at the lack of training. You have people working in such a complicated system that don’t know how the whole system works. With that said, I did the impossible. It would be much more difficult to do this is some other countries, such as the United States, where visa procedures are even more complicated.

So what’s your long-term plan with your new business?
I want to create a brand. I want to change the way people view and approach education. Approach affects the results. To stay competitive in the market now, people need to speak English. There are limited jobs so you have to diversify yourself. I find many people here in Spain are learning English because they have to, not because they want to. I want to create experiences while I’m teaching.

How is your method different that others?
I'm also interested in life coaching and directing people in public speaking. I try to integrate this into my classes. I take a theatrical approach, I get into character, and I put myself out there. My classroom is a my theater. I want my students to speak with confidence, whether in English or Spanish. In order to do that, I must make myself vulnerable as well. My students don’t need to memorize, but they do need to absorb information. They retain it because I'm doing something crazy...or at least they are paying attention. 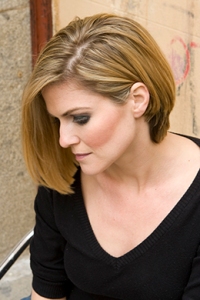 Can you give me an idea of what one of your classes is like?
I put together interactive, comedic presentations. For me, it’s like a creation, a work of art. I mix various modalities of learning such as listening, writing, and speaking. My focus is on speaking as I think it is the best use of time. Many students have had grammar courses, but they need English for speaking purposes. I use the same lesson for all groups and I modify the delivery based on their  level. For example, my speed, use of vocabulary, and sometimes I’ll use more pictures. I say no textbooks, no grammar, you can put grammar together through practice.

So is your plan to stay in Madrid?
I think of Madrid as my base. I've spent so many years starting over. I have a solid client base, friends, and the city has so much to offer, so much to do. I would love to have financial freedom to be mobile, but I can consider this as my long-term home.

How did you find out about Shimada?
My friend Sarah, one of his previous models, was in my Spanish class. I had a few other friends who got haircuts by him and referred me. When I moved to a new apartment, he was a block from my house. I had my haircut and I really enjoyed the experience. Once I find a person, I'm set.

What was the process like for you?
It was great! He just returned from Italy and he brought back these beautiful eyelashes. When he put them on, I felt like I was transformed into a celebrity. I loved walking around. I felt good, sexy, and  it brought out a good energy in me.

How long did your transformation take?
I was there the whole day. He takes his time and has a strong attention to detail. The first look took about three hours. The second, less as it required just darkening of the makeup. I really liked it when he put my hair down. It ended up being my favorite look and the one he used for the cover photo.

Were there any difficulties?
I just had knee surgery so I felt unnatural doing a few things. I don't really feel natural in front of the camera. I feel like I can only naturally look awkward.  As we went along, I felt more comfortable and stopped worrying about how the photos would turn out.

So how do you like the photos?
The still photos and cover photos I loved. There was some video as well. Zuz, another one of his previous models,  was videoing the entire time which was nice. I prefer the photos as I am not a big fan of seeing myself on camera.

Any else you would like to mention?
Doesn’t matter what you like doing, do it. Shimada is doing his project. I want people to change how they view education. I'm doing it. I feel like we’re told again and again about things we can’t do. I want to put a little bit more optimism out in the world. It shows up in the photos and it shows up in my teaching. There are options out there, if you are persistent, ask questions and keep looking.

For more information on Tringlish, please visit the official school website at http://www.tringlish.es/


The views and opinions expressed are those of the contributing authors and those interviewed. They do not necessarily represent the views of Shimada Kemp: Peluquero y estilista.