After a bit of a break, La Modelo de Mes is back! I chatted with Andrea to learn about her experience as La Modelo del Mes for November 2014.

So what are you doing in Madrid?

I am an English Teacher, something new for you I am sure. I've been here in Madrid for about three years. I work for an English academy and I’m pretty happy here in general.

What brought you to Spain?
Well, I’ve hopped around a bit. I was in Dubai working for two years as a flight attendant. Then, I was in South Korea for two years teaching English. I came to Spain because my sister was getting married. I wanted to be closer to home, but I didn't want to go to England. There's nothing for me to do there and I have always wanted to learn Spanish.

Why do you want to learn Spanish?
My mother is half Paraguayan and half German so her first language is Spanish. We grew up with her speaking a little bit of Spanish, but I was a really shy child. I didn’t take it up on board like my older sister did. I really have a desperate passion to speak another language. Having a family that's bilingual and not being able to communicate is really frustrating. You don't want to be that person at Christmas and family reunions who is confused when people are switching back and forth.

Do you feel that your Spanish has improved?
Well, teaching English in another country is sometimes a double-edged sword. You’re teaching English so you're speaking English all the time. It makes it really hard to fully immerse yourself in the language. In Dubai, everybody spoke English and you're quite segregated from nationals. When I was in Korea, I tried. It would go in my head and then out two seconds later it didn't stick. My Spanish is a little better, but I'm still not where I want to be.

What do you think piqued your interest in travel?
I come from a pretty multicultural family. Just like me, my parents hopped around a bit. My father is from Newcastle in the north of England and my mum was born in Asunción, Paraguay. When she was a teenager, she moved to Buenos Aires, Argentina to become a midwife. My dad was in the merchant navy and they met each other there. 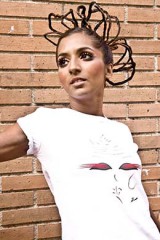 How did they manage a long distance relationship?
It was a time before mobile phones and emails, so they wrote letters to each other. My mom moved to London first. After getting married, they moved to Newcastle. When my dad got an engineering job in Dubai, they moved there. They wanted kids when things were a little more settled, but they were unable to. The situation was hard for my mom, almost a little cruel, considering my mom's profession. So, my parents looked into adoption.

So when did you become part of the family?
At that time in the UK, there weren't many babies up for adoption. Fortunately, my parents had a friend who had gone through the adoption process and suggested adopting from another country. The husband was a diplomat and was able to speed up some of the paperwork. My parents went to Sri Lanka and adopted my sister from an orphanage. Two years later, they went back to the same orphanage and adopted me. We’re not biologically related but, but pretty much as good as.

With all your parents' travels, where did you grow up?
I only spent my first nine months in Dubai and then we moved back to England.  I grew up in a few different towns in Newcastle so I feel entirely British, even though we were generally the only two brown kids in our school. We never really felt different, but I feel we always knew we were adopted. My friends always ask me, “When did you know?” My parents are white, it would be pretty stupid if we didn't figure it out eventually. The orphanage gave my parents some advice. They said, “Don't ever offer information before they ask as they may not be ready. If they do, don't lie to them.” So they always kind of had that philosophy.

Do you feel any different now that you’re older?
We're a family unit and that's how we've always just been. I feel like I am never really feel different until people point it out to me. Seeing us together, you do ask some questions...obviously. We're a pretty diverse family, German, Sri Lankan , Spanish, and English so I enjoy being different. It makes me interesting and it’s really good for dinner conversation. I really have an interest in different cultures and my one passion is travel, which shouldn't come as any surprise considering my family history.

So did you become an English teacher to travel?
I kind of fell into this. I figured, you are always going to have a job teaching English so I got my Master’s in it. My undergrad was actually in archeology and fine arts. I was a flight attendant before becoming an English teacher. Besides travel, there's isn't much consistency in my career, but I’ve come to love what I do.

So are you planning on staying on Madrid?
I never have a really straight answer to that question. As organized as I am in my day-to-day life, the future is a little less clear. As long as I am enjoying myself and things are going okay in the place that I am in, I am quite happy. If things start feeling monotonous and I reach a plateau, that's when I may consider moving on to somewhere else. At the moment, for the foreseeable future, this seems to be the place.

How did you meet Shimada?
My friend goes to him and I love how her hair looks good and natural. I was kind of avoiding of cutting my hair. I am worried I’ll say the wrong thing in Spanish and have an issue. It’s a little embarrassing considering I have a Native Spanish-speaking mother and I've lived here for so long. So I called him up and my hair turned out great. So I kept going back. He is really fun to get on with.

How did you get involved in his modeling project?
I wanted to do a little research before going the first time and came across his project. I was really interested in the stories and interviews of the women he had done. I had never heard of anything like this before and we chatted about it during my appointment. The next time I went in, it came up in the conversation and he asked if I wanted to be involved. I said, "yes!"

What was your experience like?
I am naturally a very shy person. I know, how can I be a teacher if I am shy? Teaching is a very different experience. I was a little nervous at first as I don't normally like to have pictures of me taken. Shimada is so easy-going so I was able to focus on having a good time. I don't think I would ever choose to be a model, but I have respect for those ladies.

How long did it take to prepare you for the shoot?
Probably about three hours to do hair and makeup, I thought it would take longer. I also tried sneaking in some eating there. I really enjoyed watching his creative process, people on the street confirmed how impressive his was work was. I was getting a lot of attention even though Shimada did most of the work.

Did you run into any difficulties?
Besides the standard issues of getting the right angle and lighting, I don't think we had any problems. It was clear Shimada knows what he was doing which made me feel more at ease. He also suggested vermouth which helped to relax me a little more. Walking around Madrid, It's just so picturesque. Every street looks like a postcard. I saw a Vespa and said, “Let’s take a picture on this!” Fortunately, the owner didn’t show up

Have you seen the photos?
I have not seen the finals versions, but he was kind enough to show me some on his camera. I had a lot of questions about his experience and his training, it was just a nice conversation and he showed me the photos as we went along.

What do you think he brought out in you during the shoot?
My fun side! I am naturally shy, sometimes it’s difficult for me to cut loose. I can know people for a long time and some people won’t see that side of me. It was surprising as I haven’t known him for that long, but I felt comfortable showing that.

Anything else you think is important to mention?
I just think this project is a really cool concept, hairdressers must talk to thousands of people. I like that he's taking  that and doing something with it. I also like how the focus is on people’s stories. You see these gorgeous models all the time, but you no nothing about them. I'm really interested in hearing what they have to say.

The views and opinions expressed are those of the contributing authors and those interviewed. They do not necessarily represent the views of Shimada Kemp: Peluquero y estilista.